About the Taipei Branch 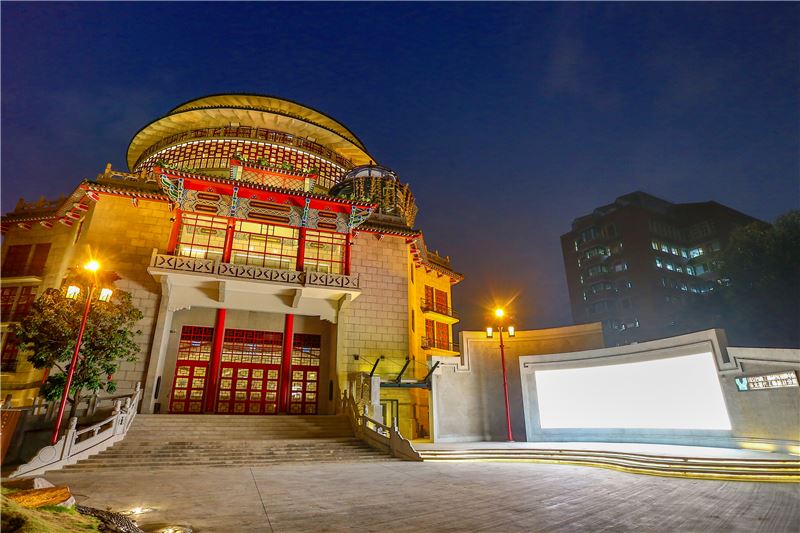 The building emulating the Hall of Prayer for Good Harvests at the Temple of Heaven of Beijing was designed by LU Yuh-Chun, the architect based in France, and completed in 1959. It is symbolic of highlighting Chinese regime legitimacy and promoting modernization of education and was first used by National Institute of Educational Resources and Research and the Science Hall. The building became Taipei City’s heritage-listed building after the Science Hall moved out in 2003. In 2008, it was officially handed over to National Taiwan Craft Research and Development Institute (NTCRI) and launched a restoration project. Due to the revitalization and reuse work, this historic building has taken on a new identity as “Taipei Branch, NTCRI” with a gorgeous fresh look and become a more approachable and pleasant public domain for art.

“Wood rafters” refer to the elongated structural component under the traditional roof. The faux bois rafters under the roof of this building were constructed using reinforced concrete. The hollow fake wood was molded out of wood, cement mortar and steel mesh together, which was a special faux bois reinforced concrete craftsmanship of the time for the purpose of reducing weight. However, due to long-term exposure to the sun and rain, the interior wood component had badly eroded to cause falling in many places and some pest damage. In addition to reengineering the original construction process, the old hanging bars were also replaced by stainless steel ones to prevent rafter falling because of erosion. 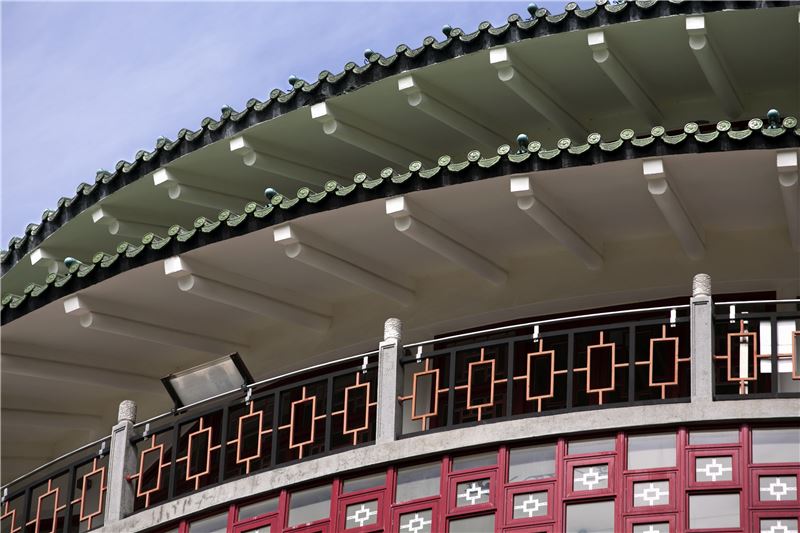 The original architect, LU Yuh-Chun, designed the exterior with a mission for “reviving Chinese culture” while he borrowed modern western concepts in interior design. The lattice window frames in exterior circular corridor on the 5th through 7th floor, along with the different floor plans on all levels, can extend your vision to the botanic garden and the surroundings. However, due to the impact of the climate and natural hazards over the years, some wooden windows had been in very poor condition. To maintain the unique characteristics of such window frame, we used the materials for aluminum windows to reproduce the window frames similar to the original ones on the 1st through 4th floor and for the exterior corridors on the 5th and 6th floors while the wood parts of interior windows are kept by the restoration method. 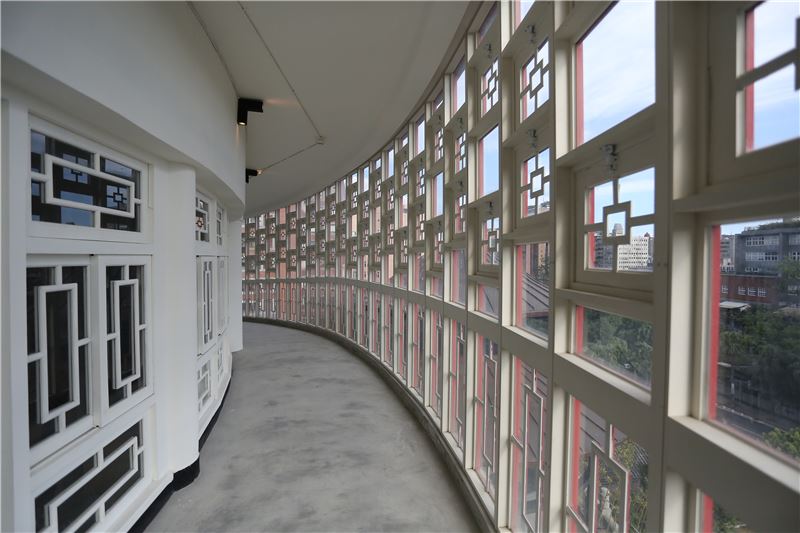 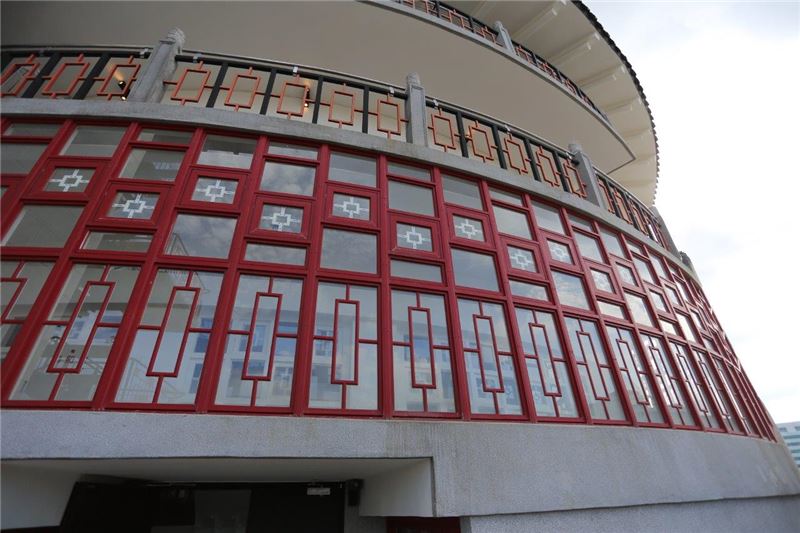 The roof of the building has five layers covered with green glazed tiles. Among the various styles, the most characteristic is the circular pyramidal roof with double eaves on the 7th through 9th floors. There are many decorative elements on the roof such as beasts at the roof ridge, eaves tiles, gargoyles and beast heads, which are all placed according to the old principles of layout.

The fairy figurines riding the phoenix placed at the top of the façade eaves give the symbolic meaning of “surviving a crisis” and “landing on your feet.” Heavenly horses and seahorses can be seen on the roof as well. The former can fly as fast as the wind and as high as the sun, and the latter can dive into the deep sea and land on one’s feet. Both are loyal and brave creatures in Chinese mythology. 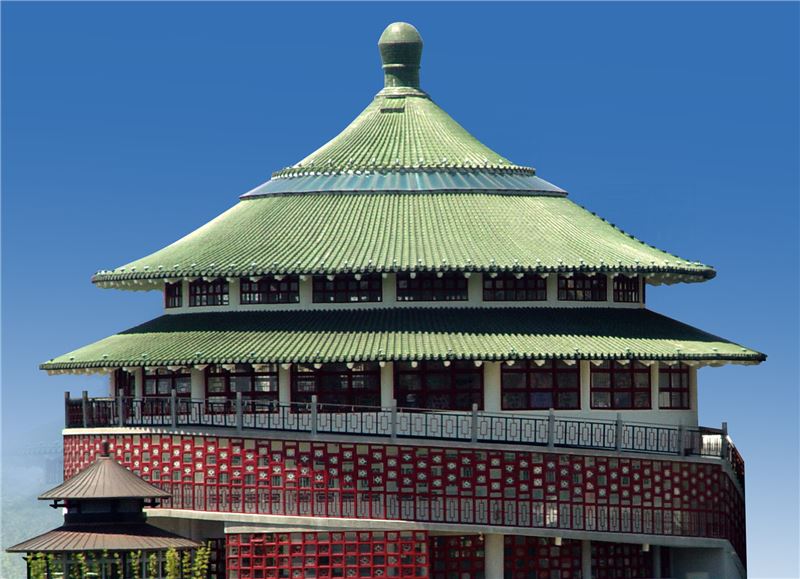 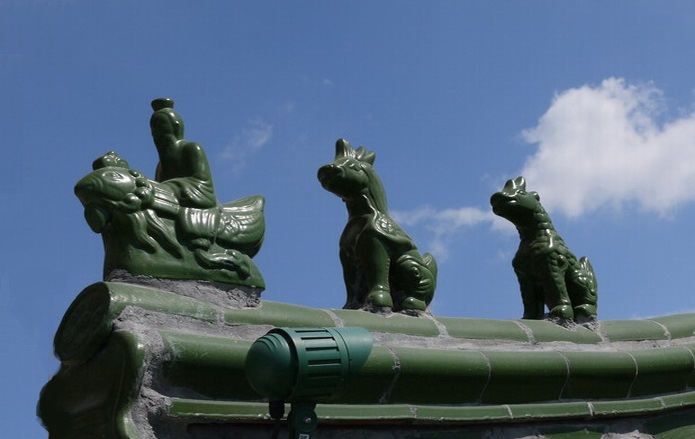 The building has three types of railings according to their construction materials: cement railing, iron railing and cement column with iron railing. Among which, cement railings have two main styles. One can be seen on the fifth floor surrounding the terrace, the stairs in south exit and added stairs in north wing. Those railings are Qing style faux stone balustrades, following the old principles of style and scale and using the precast molding technique of the time to produce faux stone structural component in concrete and baluster vases under handrails (called lotus vase in Qing dynasty). The railings of the third floor façade are designed with geometrical hollow patterns similar to the butterfly. 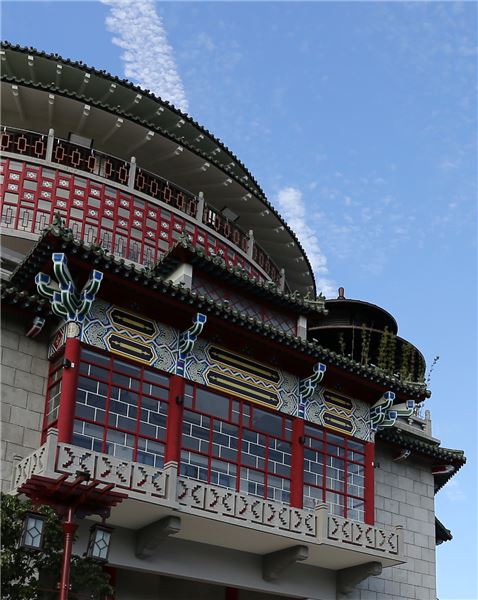 Caihua (polychrome painting) is not only one of the distinctive features in traditional Chinese architecture but also can prevent wood rot caused from wind and rain, achiving both functional and aesthetic goals. The building façade was designed in xuanzi (whirling flowers) , a decorative style commonly used in classical Chinese official buildings: with spiral patterns as the theme, the one mainly painted in green color is called “elegant five inks” while the other in gold is called “dark lines with little gold dots.” The red sheathing under the green roof was decorated with blue rafters and beams painted in cool color, making a contrast with the red-colored overhangs and columns beneath. Those overhangs around the eaves have cloud patterns in blue on a red background. 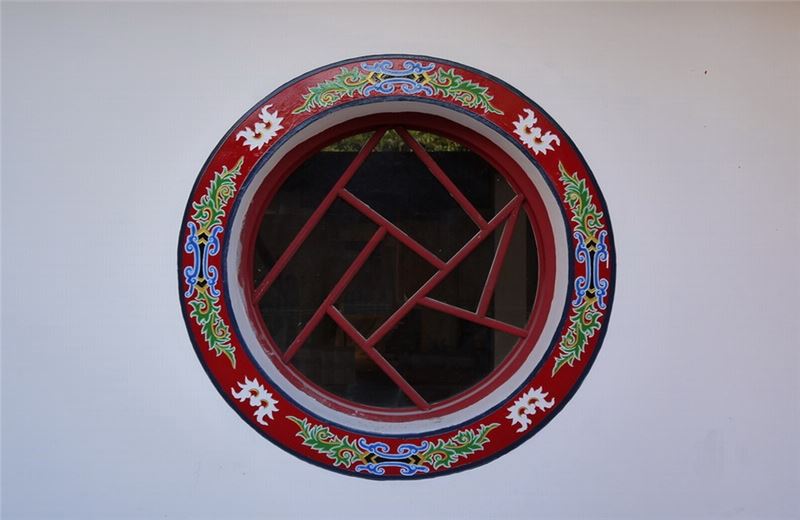 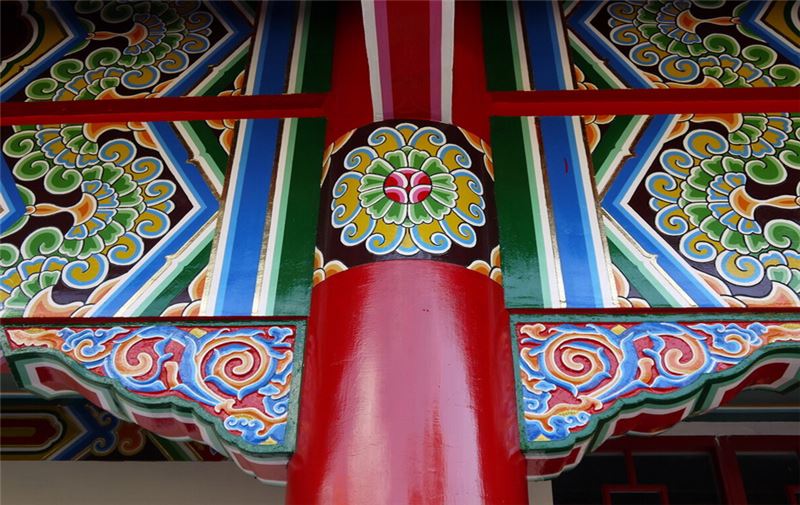 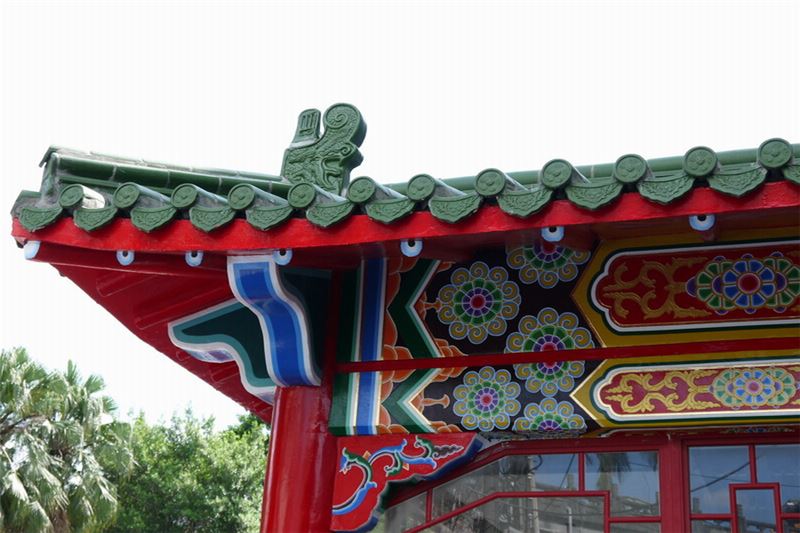 On the west side of the building forecourt, some prehistoric pottery shards were discovered in the process of excavation, as the area was on the dark gray silt and clay closed stratum, whose olive-brown silt and clay layer under showed horizontal accumulation without any disturbance or other signs of remains. In view of the shape and ornament of those pottery shards, they should be from the “botanical garden culture” in the late Neolithic Age. Knowing how to make pottery is one of the most important starting points of human craftsmanship. The discovery of prehistoric pottery in this (building) area carries a special significance of spatial and temporal coincidence and heritage for the Institute.