In the traditional mode of production, craftsmanship preserves the more harmonious ways humans relate to nature, while capital keep us separate from nature. Contemporary craft should involve a plan of action that leads human exploration back to the harmonious relationship with nature, and one way to do this is to re-examine our production system.

The hacking culture began in the 1960s and refers to the illegal (computer software or hardware) alteration of old systems. The original meaning was to enter a regulated system in a clever way and perform a certain degree of alteration to it without causing great damage. From here, Hacking is used to extend a transition period between the value of human nature and technology, which continues until the use of technology in society is decided, and then the worldview is established. This exhibition attempts to compare the spiritual analogy of the hacking system to the development of the community, and to create a positive catalyst for the traditional dyeing craft community with hacking and reorganization as the spirit and the establishment of a new world. Using the "Laser Dyeing" program as a carrier to guide the audience into an interdisciplinary process plan composed of the concepts of scientific community and open source, and create conventions in areas such as materials science, electronic engineering, photography, and biological arts, thus becoming a beneficial hacking and interface modification.

Production systems can be seen as a measure of the sense of time: due to the different speeds of production methods, a social speed difference is generated, which separates us from each other in different social mental states. The production system determines the material value in society and determines the actual appearance. But this reality is illusory. Once we understand that time is relative, our reality can be adjusted accordingly. When two macros using different speeds meet to cause chaos in time order, it produces unmeasured value, which allows us to temporarily liberate from measurable reality. It is important to continuously create this kind of social speed difference. The time machine is just a dream. Although we have never really been liberated from reality, we can use infinite curiosity to continuously obtain temporary results through mobile and mixed communities. Unlimited possibilities to get temporary momentum and create new life.

The exhibition aims to introduce a global network to the audience through the development footprint of the laser dye project and its collaboration with the natural fiber community and international communities. As the internet becomes saturated, geographic distance and communication costs decrease, and international workshops and art exchanges become increasingly common, resulting in more individual movements with non-profit purposes. The movement of these individuals caused an unexpected flow of knowledge, community collaborations and the birth of a new production system. Individual travel experiences and international community connections began to provide more input resources for creative programs. In contrast, from the output point of view, this migration also provides a social position for contemporary artists and interdisciplinary workers, liberating the artist from the gallery and the art industry.

Entering the chemical process of laser cyanide plate development at the nanometer scale, we see the crystals of potassium ferric oxalate separated from the combination of ferric ammonium oxalate and potassium ferricyanide. The photons are excited by infinite reflection between the mirrors in the diode cavity, and land on the fiber pre-coated with the photosensitive agent through the command of consciousness to produce these blue molecules. This process is half artificial and half random. Yes, we can only control the part we participate in. We invented photographic technology and then manipulated the fourth dimension through memories. Just as our shadow landed in the memories of others, light is the medium on which we perceive three-dimensional space, while time is in the fourth dimension, and memories are human-centered. John Herschel, the inventor of the cyanotype, discovered that the reason for the cyanotype was not to find better typography, but to verify the accident in another study. His curiosity was the same as that of the universe. Coherence and harmony, instead of responding to the human-centered production system, he summoned the consciousness of these photosensitive technologies and the fragmentary self-similarity, half random and half subjective. Now we put the laser, the development process, and the natural plant dyeing together seemingly randomly, just like the shadows projected in other time and space. The uncontrollable randomness allows curiosity to live forever. Here we will have our vision printed.

Opening Hours：Tuesday to Sunday and national holiday, from 9am to 5pm 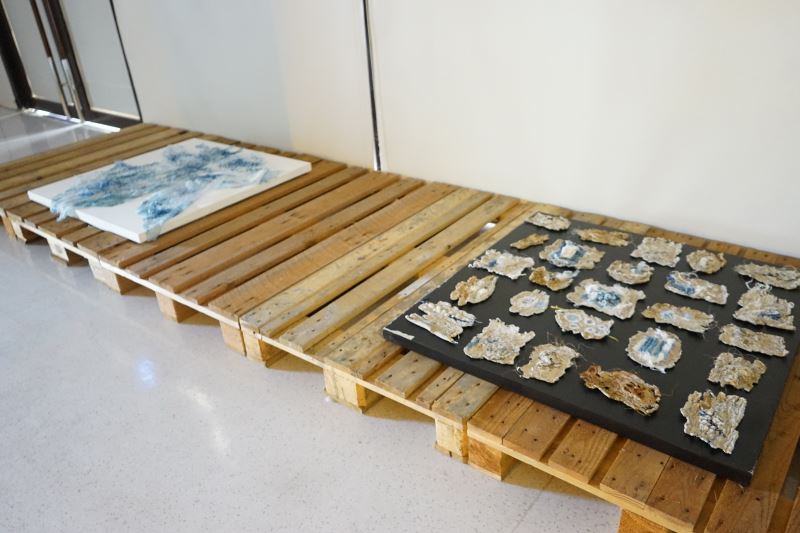 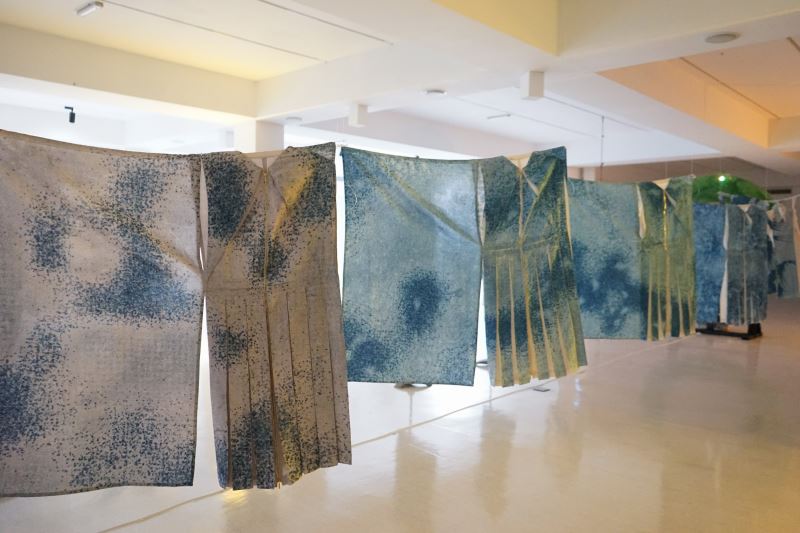